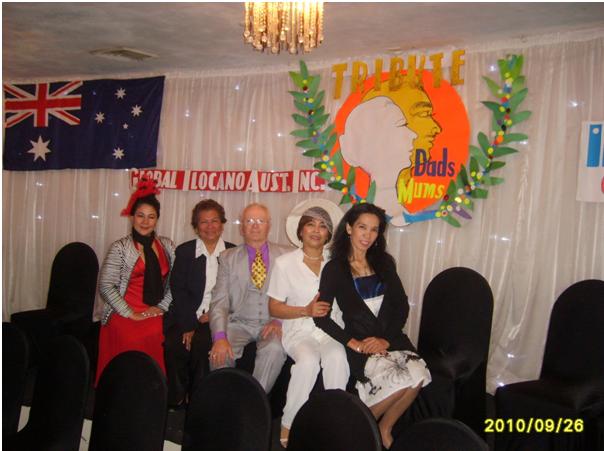 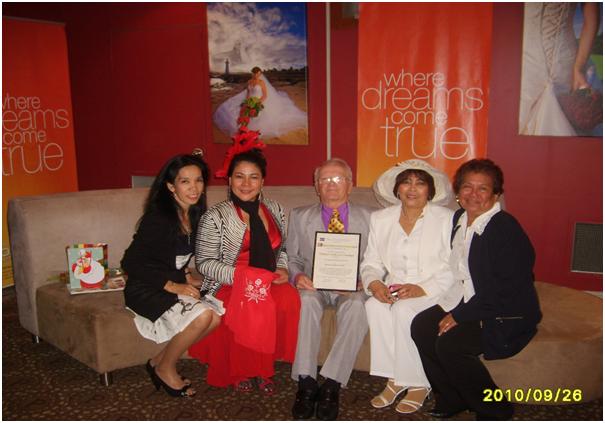 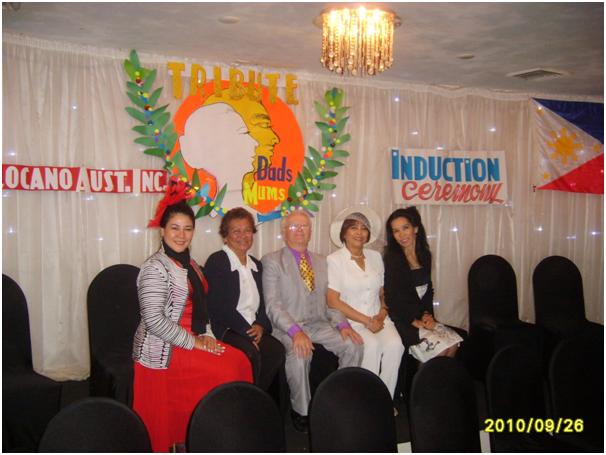 AFBWCI  Directors represents during the Global Ilocano Australia Inc. Induction of officers held at  Wollongong in cooperation with the Illawara womens group commemorating the dad and mum tribute. Nick Meissner was presented an award for  being a good dad and Raquel Pellero was adjudged as best Melbourne cup attire. 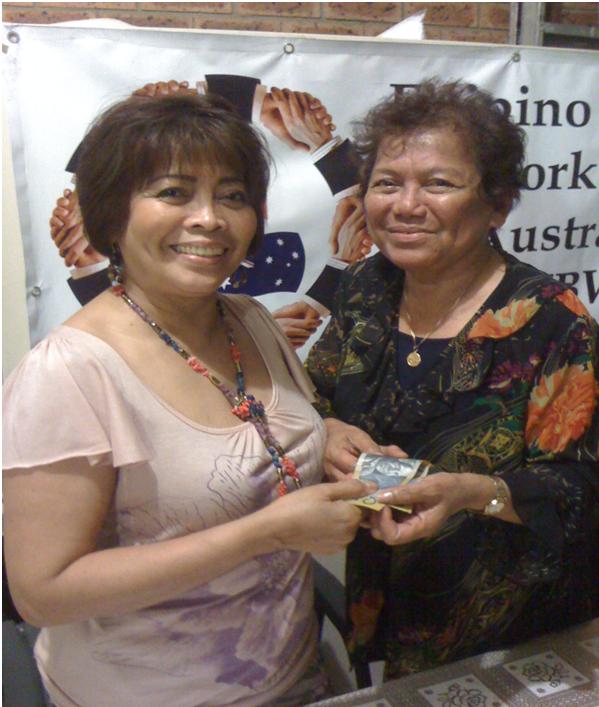 Winner of the AFBWCI Bingo Bonanza, Dory Meissner happily received her winning money handed by Yolanda Polinar, AFBWCI Director who happens to be the Chairperson of the Bingo activity as well. The goal of this activity is to promote our organisation as well our camaraderie and amity. To meet and greet with the AFBWCI members and guests as part of our socials. Proceeds will help support AFBWCI community projects. AFBWC Inc would like to convey our congratulations and keep up the good work.  ARK 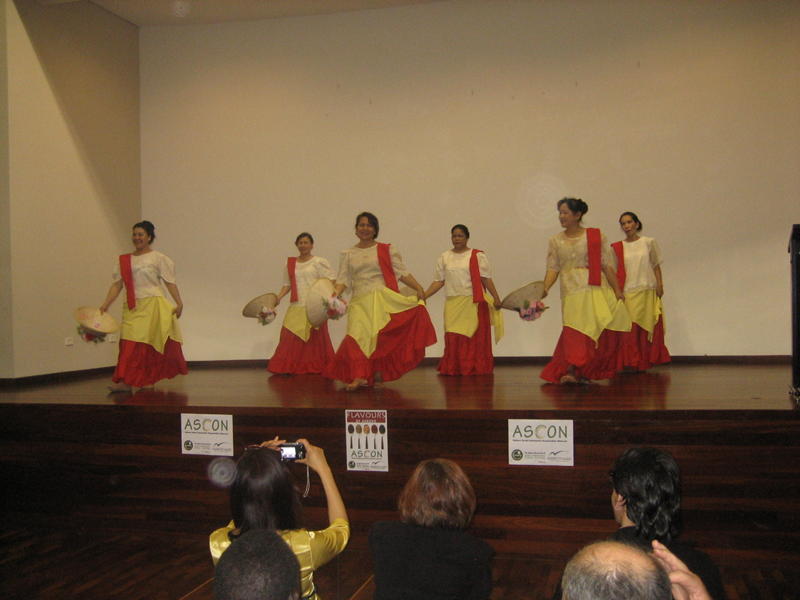 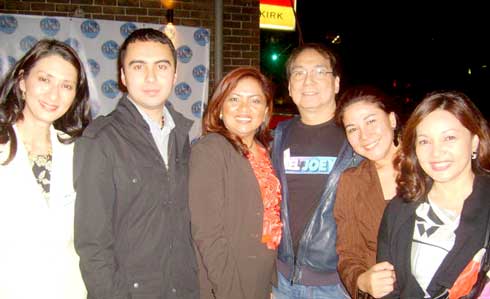 One of the most talented and multi award winning entertainment duo in the Philippines, Mel Tiangco and Joey de Leon, were in Sydney recently to explore the beautiful city in commemoration of the 6th anniversary of their show, “Mel n Joey”.

AFBWCI Secretary Raquel Pellero, who hosted and coordinated their trip, said that Mel and Joey and their crew were in Sydney to shoot the anniversary episode of  their top-rating show.  Joey was accompanied by his partner in life, Eileen Macapacal, 1982 Mutya ng Pilipinas runner-up.

The vivacious Ms. Tiangco, news anchor of the GMA television program Beinte Kuwatro (24) Oras, tagged as a leading in news program in the Philippines, and her vibrant partner Joey de Leon were reportedly overwhelmed by the camaraderie and hospitality of their fellow Filipinos.  The two TV hosts were welcomed by their kababayans at the Dunkirk Hotel on the 19th of October 2010. The “meet and greet” was spearheaded by the Universal Broadcasting International (UBI) President and CEO Regina Leviste and her dynamic staff, Gigi Alonso to give their UBI subscribers an opportunity to meet the icons of GMA. The dinner was well attended and the guests enjoyed the photo opportunity with the pair who also readily gave autographs.

Mel and Joey visited and filmed in different places in Australia, such as Sydney Harbour Bridge, Mrs Macquarie Chair, Bondi Beach and Circular Quay. They also interviewed successful Filipinos living in Australia and New Zealand.  The pair said they would also like to visit Melbourne, as well as Wellington and Auckland in New Zealand.

The episode will air on GMA 7 in the Philippines on the 7th of November 2010. 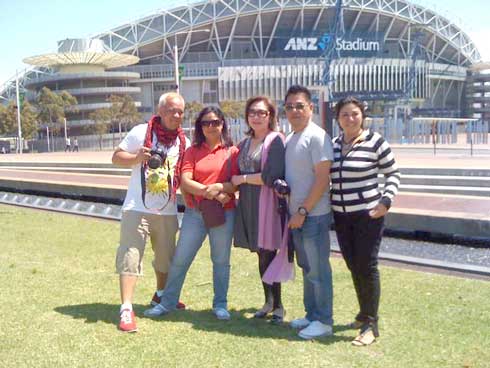 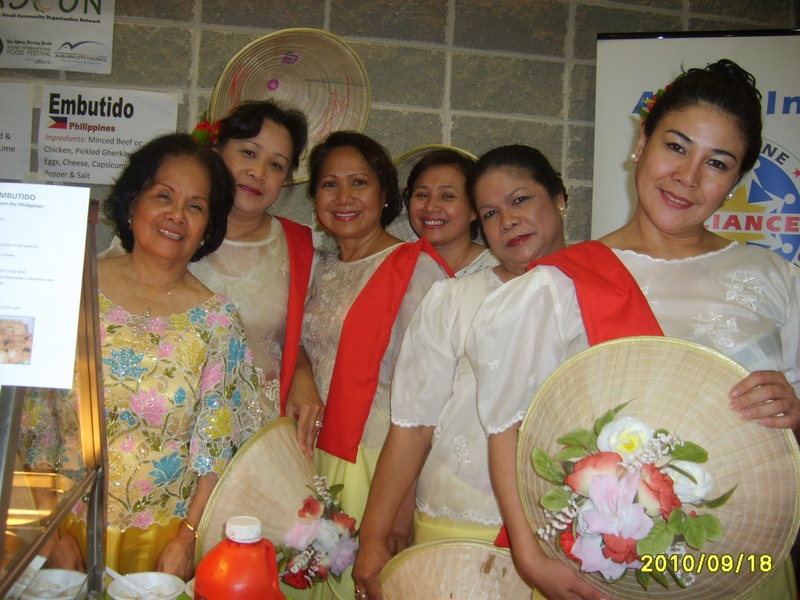 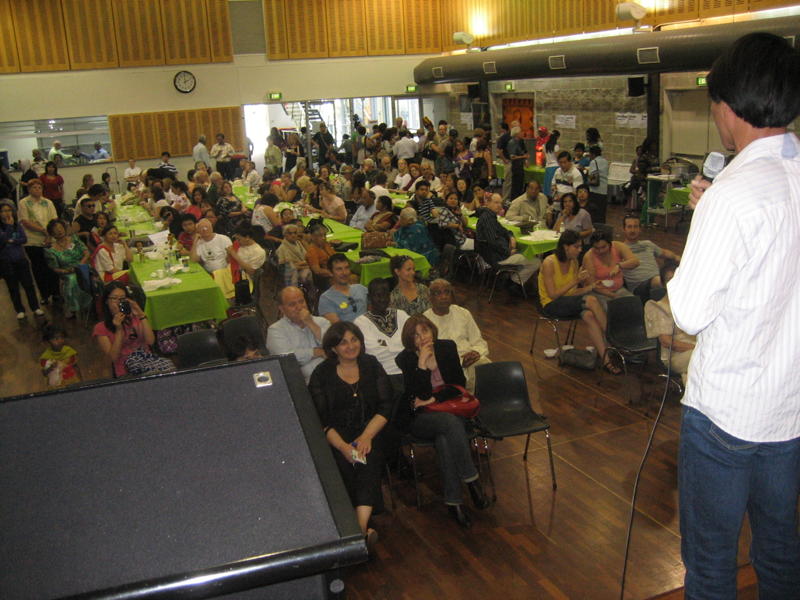 AFBWCI representatives who actively participated in last Saturday the 30th of October 2010 at the Flavours of Auburn Food and Cultural Festival held at Auburn Civic Centre. Once again, we have shown  to the various ethnic communities and mainstream Australians that the Filipino community  through APCO, is very much a part of the multicultural Australia. The sharing of authentic cuisines from various countries and cultural presentations (dances, songs, costumes and interpretative stage play) were excellent avenues to foster better understanding and appreciation of the richness and uniqueness of each culture. This was an excellent example of 'unity in cultural diversity' in action! 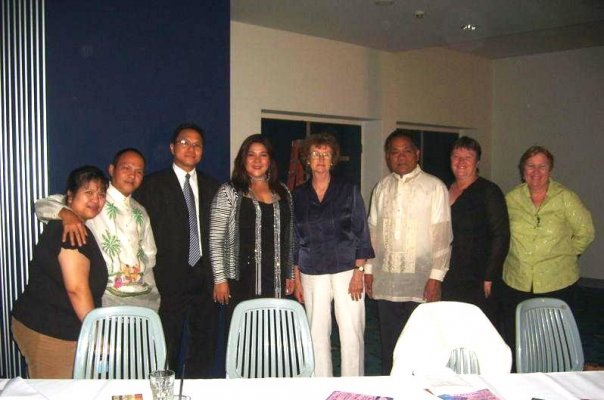 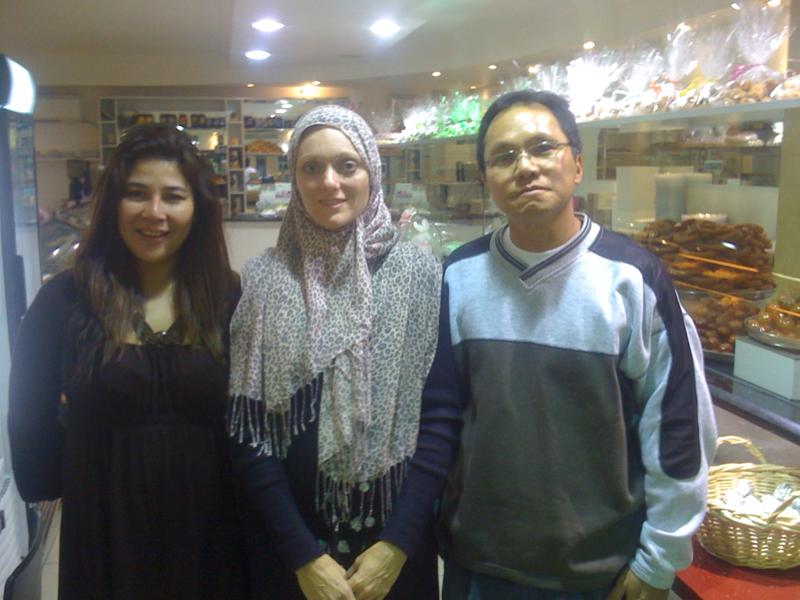 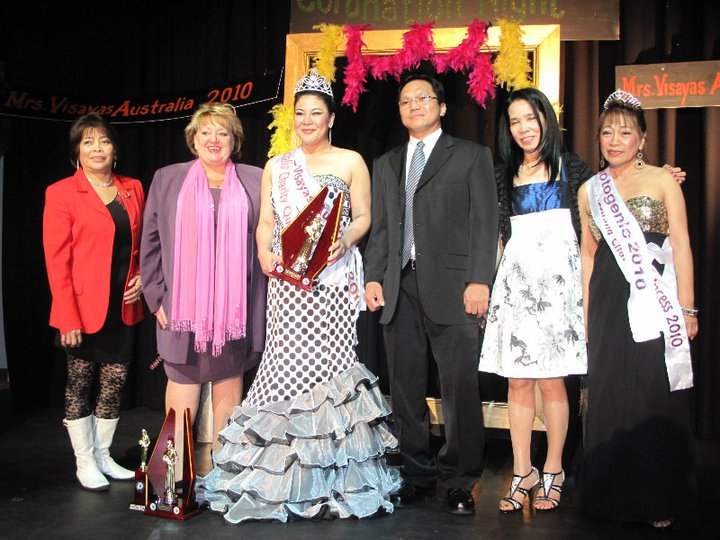 Raquel Pellero, Secretary and entry of the Australian-Filipino Business and Workers Club Inc. (AFBWCI) won The 2010 Mrs.Visayas-Australia Beauty Pageant sponsored by the Visayan Association of Australia Inc. and supported By APCO and Affiliates was held at the St. Johns Park Bowling Club Auditorium, on 2nd October with such anticipated excitement to all those who attended. The Emcee Mr. Jhun Salazar, Vice-President of VAA Inc. opened the night with Mr. Erwin Villaver singing such stirring versions of the National Anthems and the Invocation presented by

Mr. Richard J Ford. The contestants and their supporters were all obviously apprehensive in anticipation for the announcementof the winners.

The VAA Inc. President, Mrs. Edna Voros announced in her opening address the purpose of the annual event, which is to raise funds for the VISMIN TEA Project (Visayas-Mindanao Tertiary Education AssistanceProgram) to help underprivileged students to complete their studies at University or College to have a better future. Following the speech was a very sumptuous buffet dinner.

Our guest speaker, Dr. Cen Amores reiterated in her speech that the support  of APCO Inc. (Alliance of PhilippineOrganisations) will continue to give to fellow affiliates to continue worthwhile projects that seek to help our fellow kababayans in Australia and the Philippines, where it will be mostly needed.

The evening’s entertainment was provided by the ever charming Ms. Ma. Paz Barcenas, as well as the delightful talent of Ms. Diana Berquist. The surprise guest appearance of the talented

Ms. Cleo Diana, along with the much applauded Mindanao Ethic Dance Group lead by Ms. Emma Braceros, set the scene for the five beautiful contestants, Mellie Connelly, Vivian Yabut, Lee Meekan, Lisa Foss and Raquel Pellero who took the stage to treat the audience with a dazzling display of the Visayas Filipina charm and beauty, representing all areas of the Visayas-Mindanao Regions.

As an observer one can only admire the ladies for showing such courage and dignity, not only representing their regions but to take to the stage dressed in such exotic gowns that had everyone in the room awed and spellbound by such beauty and elegance. The five contestants presentedt hemselves to the panel of judges composed of Ms. Fe Hayward, Mr John Hierlehyand Ms. Glorialea King a former Ms. Philippine-Australia 2006 and Miss World Contender. The panel found the task of judging each contestants in different categories because each one of the contestant was equally awe-inspiring. Each individual category the ladies presented was beautifully choreographed by Mr. Rudy Reyes and Mr. Victor Valdez. The results of the night were – Raquel Pellero won a trifecta with Best In Evening Gown, Mrs. Charity Queen 2010 and also the Mrs. Visayas-Australia 2010 title. Mellie Connelly also an AFBWCI member  won both the Mrs. Photogenic and Mrs. Charity Princess 2010 titles. The ever charming Lee Meekan taking out the title of Mrs Friendship 2010. One of the highlights of the night was when Mr. Erwin Villaver charmed not only the ladies of whom he serenaded for but the audience as well.The music for the night was provided by DJ Mr. Melchor Parina. Another successful venture for the Visayan Association of Australia Inc. with over 180 people in attendance.

Pellero, the winner of this year’s pageant,extends the following message of thanks: “I would like to say thank you for the unsullied support from my sponsors, especailly to Marilou Gorga, Maria James, Mahal, APCO, AFBWCI, Villoni and Valerie Tolosa for their immaculate and elegant creation that made me look stunning and spectacular during the competition. My sincerest gratitude also goes to my family especially my son KC, all my friends and colleagues for their generous contribution to make the event and fundraising a success. Thank you also to Freelife for their magnificent Taislim product which helped me trim down in such a short period of time to make me look fabulous during the contest"

"Participating in this magnanimous event is not only for the purpose of being adjudged as a winner, but most of all it is an honour to be a part of the dedicated organisation that serves the community by promoting our culture and values and special events to generate funds for ongoing community projects".

The Australian Filipino Business and Workers Club  Inc.(AFBWCI), held a welcoming party on the 1st July 2010 at the Basement Club/Restaurant in Blacktown for the Quezon City, Philippines Bahaghari Lions Club Executives headed by Pres. Lulu Flores and Past Pres. Arnold Tolentino, who were attending the International Lions Club Convention in Sydney. 12 Lions Club delegates attended and were entertained by singers Cleo Baltazar and Jessica Manthey,backed up by dancers Mel & Victor and Rudy & Maria. The overseas guests were welcomed by President Ariel Satorre, of AFBWC Inc. The night was also attended by representatives of various community organizations, including the Mount Druitt Lions Club, Dr. Cen Amores, Pres. of Alliance of Philippine Community Organizations Inc.(APCO), Rudi Reyes, Pres. of Maharlika Inc., Elsa Collado, Pres. of Philippine Community Council of New South Wales Inc.(PCC) ,Edna Voros, Pres. of the Visayan Association of Australia, Inc. plus other Filipino organizations. Evelyn Zaragoza, publisher of the Philippine Community Herald Newspaper was among the media contingent attending the night. The AFBWCI would like to thank all of the supporters and our emcee, AFBWCI Secretary Raquel Pellero, plus the AFBWCI officers and directors that includes,Treasurer Dory Meissner, PRO Vivian Brewington, Directors Bong David and Gener Castillo. 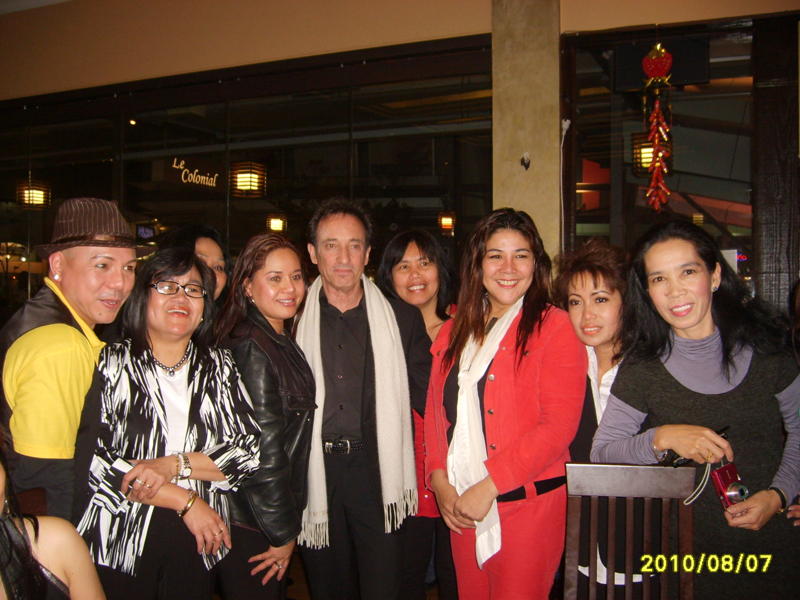 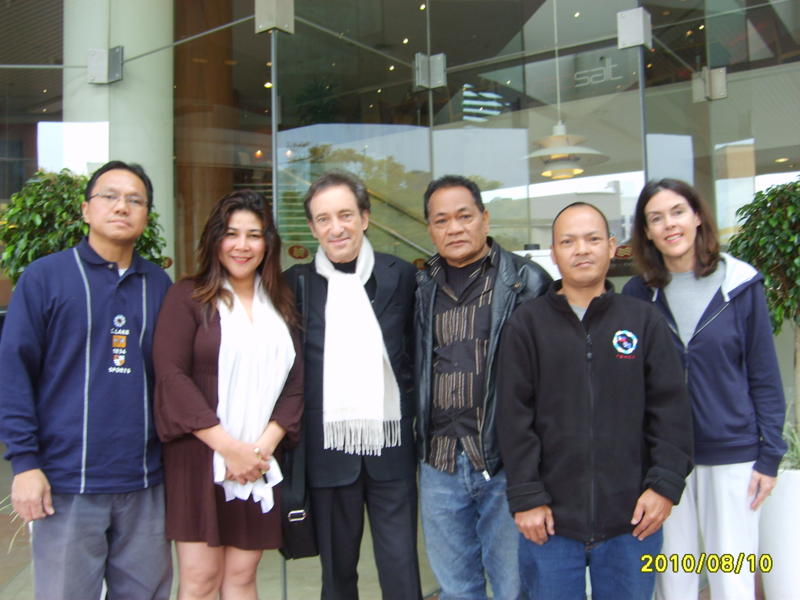 The Filipino Business & Workers Club Australia Incorporated (FBWCA) will be sponsoring the  "David Pomeranz Concert Project" in the cooperation with the Manila Sydney entertainment and proudly supported by the Filipino/Australian business communities. The fundraising concert is going to be held on 21st of August 2010, Saturday, at the Whitlam Leisure Centre Liverpool Stadium 90A Memorial Avenue, Liverpool, NSW. Doors will open at 5:00pm for 7:30pm start.

David Pomeranz is an acclaimed international singer/songwriter with greatest hits in the 80s and 90s music chart such as "Got to believe in Magic", "King and Queen of Hearts" and "Born for you".David will be propped up with preposterous front acts with our local talents including Chelsea Castillo, Monique Shippen, Cleo Diana,Jena Gigante and Ben 2010 and Special appearance of Miss Jessica Manthey and Sidney Perez.

FBWCA is a newly-formed non-profit community organisation, which is mainly from the FIlipino-Australian community. Our aims and objectives are to encourage,support and initiate fundraising projects for a good cause and make provisions for the Filipino- Australian Business/Workers in the community relative to their awareness and greater understanding of business opportunities & ethics, workers rights, privileges and welfare.

The goal of this concert is to raise funds and proceeds will help support our club's community projects and outreach services in the Philippines and Australia.

At this stage we are still soliciting sponsors and we endeavour for your kind support. In return as a gratitude, your business/company and individual will be highlighted by advertisements with overhead slides presentation before and after the show, set up of promotional stall, recognition and acknowledgement of contribution at the event, PLUS one(1) complimentary VIP ticket.  We look forward for your support.

BINGO BONANZA "FUNDRAISING for a CAUSE"

Bingo is an expression of surprise at a sudden occurrence or the successful completion of an event.

The game's history can be traced back to 1530, to an Italian lottery called "Lo Giuoco del Lotto D'Italia," which is still played every Saturday in Italy.

In the U.S., bingo was originally called "beano" and renamed it “BINGO” after someone accidentally yell “Bingo”instead of "Beano".

In Germany, Bingo was used as a child's game to help students learn math, spelling and history.

In Pennsylvania they used bingo as a means of raising church income.

In Sydney Australia, FBWCA used it to promote camaraderie and amity whilst to raise funds to support the FBWCA’s  community outreach services

in the Philippines and in Australia.

The success of this Bingo Fundraising will depend on the turnout of our supporters, therefore, your attendance is highly appreciated. FBWCA will endeavour your support for this worthwhile and community oriented project. ARK